Home » A Cry For Help! » So that You might be Righteous! 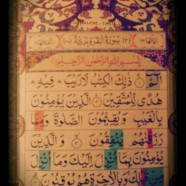 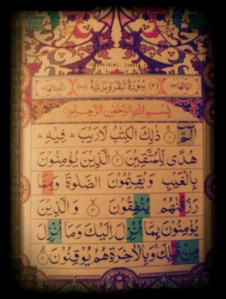 Surah Al-Baqarah (The Cow)
In the Name of Allah, The Most Gracious, Most Merciful

1. Alif-Lam-Mim. [These letters are one of the miracles of the Qur’an and none but Allah (Alone) knows their meanings].

3. Who believe in the Ghaib and perform As-Salat (Iqamat-as-Salat), and spend out of what we have provided for them [i.e. give Zakat , spend on themselves, their parents, their children, their wives, etc., and also give charity to the poor and also in Allah’s Cause – Jihad, etc.].

4. And who believe in (the Qur’an and the Sunnah) which has been sent down (revealed) to you (Muhammad Peace be upon him ) and in [the Taurat (Torah) and the Injeel (Gospel), etc.] which were sent down before you and they believe with certainty in the Hereafter. (Resurrection, recompense of their good and bad deeds, Paradise and Hell, etc.).

5. They are on (true) guidance from their Lord, and they are the successful.

6. Verily, those who disbelieve, it is the same to them whether you (O Muhammad Peace be upon him ) warn them or do not warn them, they will not believe.

8. And of mankind, there are some (hypocrites) who say: “We believe in Allah and the Last Day” while in fact they believe not.

9. They (think to) deceive Allah and those who believe, while they only deceive themselves, and perceive (it) not!

10. In their hearts is a disease (of doubt and hypocrisy) and Allah has increased their disease. A painful torment is theirs because they used to tell lies.

11. And when it is said to them: “Make not mischief on the earth,” they say: “We are only peacemakers.”

12. Verily! They are the ones who make mischief, but they perceive not.

13. And when it is said to them (hypocrites): “Believe as the people (followers of Muhammad Peace be upon him , Al-Ansar and Al-Muhajirun) have believed,” they say: “Shall we believe as the fools have believed?” Verily, they are the fools, but they know not.

14. And when they meet those who believe, they say: “We believe,” but when they are alone with their Shayatin (devils – polytheists, hypocrites, etc.), they say: “Truly, we are with you; verily, we were but mocking.”

15. Allah mocks at them and gives them increase in their wrong-doings to wander blindly.

16. These are they who have purchased error for guidance, so their commerce was profitless. And they were not guided.

17. Their likeness is as the likeness of one who kindled a fire; then, when it lighted all around him, Allah took away their light and left them in darkness. (So) they could not see.

19. Or like a rainstorm from the sky, wherein is darkness, thunder, and lightning. They thrust their fingers in their ears to keep out the stunning thunderclap for fear of death. But Allah ever encompasses the disbelievers (i.e. Allah will gather them all together).

20. The lightning almost snatches away their sight, whenever it flashes for them, they walk therein, and when darkness covers them, they stand still. And if Allah willed, He could have taken away their hearing and their sight. Certainly, Allah has power over all things.

21. O mankind! Worship your Lord (Allah), Who created you and those who were before you so that you may have the chance to be Righteous.