About My Late Father! 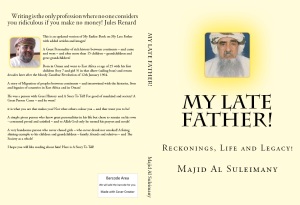 In the late 1960s,  my Late Father returned to Oman by dhow (sailing boat) from Mombasa in Kenya from Mafia Island Tanzania (Tanganyika then) – and in trying to find if the country (Oman) was bearable enough to return to after the Imam uprising and the country being under dictatorial draconian rule in the dark days of our history of Oman!

He had ‘wasted’ his life (and ours too!) by supporting The British Colonialists against the Locals and The Nationalists – to the extent that our shop was boycotted by them and we were besieged in our house in Kilindoni Mafia!

He sold all his properties in Oman making the one who bought it as one of the ‘rich families’ in Oman later on! Instead he decided to move the family to Zanzibar Sultanate – only to return after the bloody Zanzibar Revolution in January 1964!

This is His Story! I hope you will enjoy reading about him!

This is an Email sent to me by a Retired British Military Top Brass assigned at one time to Oman. It says and explains a lot of things!

I hope you will remember me? I used to be your greatest fan of your Observer Columns Between Us Only! Sad the columns had ended! Anyway, I had bought your book on line in Amazon in UK – My Late Father!

You should give this book your special attention and circulation especially in Oman to destroy the myth that many of your people from Zanzibar East Africa only returned because there was now oil and not because there was a revolution in Zanzibar where thousands of Omanis and others were butchered in cold blood.

And that your links to Oman are Great Grandparents linked. Your father was the best example of an Omani who went to East Africa as a young man with his first 2 children also born in Oman. There is no better example to destroy the myth than your book on your father.

Again great works which you need to be congratulated once again.

From A Fan (British Military – Retired)

This is my 47th book after the New Books after my prostate operation!

I have written a lot about my Late Father (PBUH) in all my columns writings and books – and, therefore, it was quite easy to write this book!

The East Africans – especially in Mafia Island in Tanzania well knew him as The Angry Arab!

This is an updated version of my earlier book on My Late Father with added articles and images! He was a Great Personality of rich history between continents – and came and went – and after more than 15 children – grandchildren and great grandchildren!

Born in Oman and went to East Africa at age of 25 with his first children (boy 7 and girl 5) in that dhow (sailing boat) and return decades later after the bloody Zanzibar Revolution of 12th January 1964.

A story of Migration of peoples between continents – and intertwined with the histories, lives and legacies of countries in East Africa and in Oman!

He was a person with Great History and A Story To Tell! For good of mankind and society! A Great Person Came – and he went! Born and bred in The Oman Interior – from Omani Parents and Grandparents – and he went and returned from Tanzania (Zanzibar) – it is what you are that makes you! Not what others colour you – and that want you to be!

A simple pious observing person – yet realistic and practical – who knew great personalities in his life but chose to remain on his own – contented proud and satisfied – and to Allah God only he turned his prayers and needs!

A very handsome person who never chased girls – who never drank nor smoked! A fining shining example to his children and grandchildren – family, friends and relatives – and The Society as a whole!

I hope you will like reading about him! Here is A Story To Tell!

I have reproduced a few articles where my late parents are mentioned. Otherwise it will be a very big book!

Recommended Reading Books – in addition to this one – are at the End of The Book!

The Author is an ex-retired now Management and Human Resources Consultant, Advisor, Expert and Professional with over 40 years experiences in companies in Oman and GCC. He has published 43 books before this one – see www.myownmajid.com

Lives in Muscat in Oman – married with grandchildren.

Writing has been his passion and hobby from the age of 14 years old and his first essay had won a National Competition at this age. He has been writing wherever he was – from Schools, Colleges, Universities and Company Magazines and Newsletters! He is also a noted and famed Columnist where many of his books originate!

His famous quote is always – Writing is the only profession where no one considers you ridiculous if you make no money! – Jules Renard!

More about the Author here – www.myownmajid.com